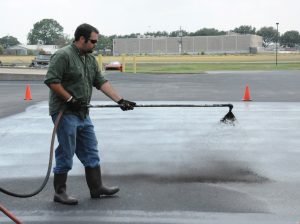 A group of eight Minnesota municipalities recently filed federal lawsuits against seven chemical refiners. The municipalities seek to offset the costs of limiting environmental damages from polycyclic aromatic hydrocarbons (PAHs). The plaintiffs allege that the refiners knowingly sold coal tar-based pavement sealants high in PAHs despite widespread evidence that the substances can cause cancer in humans and harm to fish when unsettled by car tires and swept into waterways by wind or rain.

The sealants, made from refined coal tar, were once commonly painted over parking lots, driveways, and other hardscapes to enhance aging pavement’s ability to weather the elements. Although Minnesota became the second U.S. state to ban the sale and use of coal tar-based pavement sealants in 2014, many municipalities in the state still are discovering high PAH concentrations in soil and stormwater ponds.

“This is dangerous stuff,” Daniel Shulman, an attorney representing the cities in separate lawsuits, told the Minnesota Star Tribune. “The people and companies that caused this problem should have known that their products were dangerous, and it should be their responsibility to pay for it–not the taxpayers.”

Purging PAHs from stormwater ponds is not simple or cheap. As existing sealants continue to degrade over time, PAHs can end up in sediment entering the more than 15,000 stormwater ponds in the Minneapolis-St. Paul metro area. When enough of that contaminated sediment enters ponds, federal regulations require municipalities to dig up and transport the sediment to landfills as opposed to traditional mitigation measures.

That difference could double or triple total cleanup costs, reports the Tribune. In Burnsville, public works director Ryan Peterson told MPR that as many as one0third of the city’s 270 stormwater retention ponds are contaminated with enough PAH to require transport to landfills.

Aiding the plaintiff’s case is a 2010 study conducted by the Minnesota Pollution Control Agency. The study found that about 67% of the total PAH-contaminated sediment in metro-area stormwater ponds originated directly from the coal tar-based sealants.

“We’re not trying to say that the ponds filling with sediment are the fault of the coal tar providers,” Peterson said. “It’s the fact that we have to manage in a different way because of it.”

According to the Twin Cities Pioneer Press, state pollution officials estimate that total PAH cleanup costs for sediment-heavy ponds in the Minneapolis-St. Paul metro area could exceed $1 billtion, a burden likely to fall partially on taxpayers if the lawsuits are unsuccessful.

Cost isn’t the only issue

The excessive cleanup costs faced by the plaintiffs have a ripple effect on water quality. Much of the funds budgeted to ensure retention ponds are maintained to keep pollutants out of larger and more vulnerable waterways must now go toward sediment monitoring, testing, and disposal, Peterson said.

“If we can’t clean {the retention ponds} out as quickly, then phosphorus and other contaminants will continue to bypass the ponds,” Peterson told Minnesota Public Radio. “The result will be decreased surface water quality of the lakes and streams that people love.”

Statewide bans on coal tar-based sealants are currently in effect only in Minnesota and Washington. However, a growing number of municipalities, university campuses, and retailers also have imposed bans, including Washington, D.C., the University of Illinois (Springfield), and Home Depot (Atlanta).