In Your Home, News 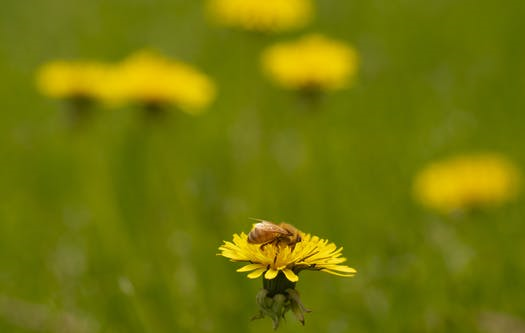 The state of Minnesota will help homeowners turn their lawns into bee-friendly habitat under a spending plan approved by the Legislature and sent this week to Gov. Tim Walz.

The state will set aside $900,000 over one year to assist homeowners by covering much of the cost of converting traditional lawns by planting wildflowers, clover and native grasses in an effort to slow the collapse of the state’s bee population. The plan was trimmed down from the original House and Senate proposals, which would have provided funding for three years.

The plan could help replenish food sources for pollinators of all kinds, but will specifically aim at saving the rusty patched bumblebee, a fat and fuzzy species on the brink of extinction that seems to be making its final stand in the cities of the Upper Midwest.

The program would cover up to 75% of the cost of each conversion project, and up to 90% in areas with a “high potential” to support rusty patched bees.

Research at the University of Minnesota has shown that bumblebees are particularly important to the region. They land on flowering stems and vibrate at a frequency close to a musical C note, which unlocks pollen other insects can’t reach.

It’s not clear yet exactly how and when residents will be able to apply for the assistance. The state Board of Water and Soil Resources (BWSR) will run the program and decide how grants will be issued. BWSR officials are establishing the criteria and other details, said spokeswoman Mary Juhl.

State Rep. Kelly Morrison, DFL-Deephaven, who introduced the bill I the House, said she hopes it will be ready for residents by next spring.

“I have gotten a ton of e-mails and so much feedback from people who are interested in this,” Morrison said. “People are really thinking about how they can help.”

The loss of native prairie and other wild habitat across the country has made flowering lawns in suburbs and cities more and more important to pollinators, said James Wolfin, a graduate student at the U who has been researching bee diversity and habitat.

His research has focused on “bee lawns,” yards that have been seeded with small native flowers such as Dutch white clover, creeping thyme, self heal, ground plum and dandelions to grow up along with grass. The flowers have proved to be an excellent food source for bees while being cheap to plant and maintain, Wolfin said.

“A pound of Dutch white clover is about $7 and it grows low enough that people wouldn’t even have to change the way they mow their lawn,” Wolfin said.

Some 55 of the state’s roughly 350 species of bees have been spotted eating Dutch white clover alone, he said.

“So just by not treating white clover like a weed and letting it grow in a yard provides a really powerful resource for nearly 20% of the bee species in the state,” Wolfin said.

“Diversity is the key,” Schneider said.

Lawmakers also agreed to help bolster the habitat of larger wildlife. Under the spending plan, the state will use tax dollars for the first time to help fund the Department of Natural Resource’s (DNR) nongame wildlife program, which had been almost entirely funded through donations since its creation in the 1980s.

The number of people who donate to the program, which helped save bald eagles, peregrine falcons and trumpeter swans from the brink of extinction in the state, has been steadily falling each year. Contributors typically check a box on their Minnesota tax returns.

The state will give the program $513,000 next year to supplement the $2 million it typically expects from donations and matching grant programs.

State Rep. Rick Hansen, DFL-South St. Paul, said lawmakers have been trying to find an additional source of money for the program for several years. It will come from the Environment and Natural Resources Trust Fund, which is funded with money generated by the Minnesota Lottery.

“We thought it was important to get some dollars for this program,” Hansen said. “It’s a good use of the trust fund and we feel that the DNR will be able to prioritize its use.”

“We’ve had things on our wish list for years, and we’ll go through a process to determine which projects now we can fund,” Naumann said.

From the StarTribune, written by Greg Stanley